Grupo Valora is a canarian holding company conformed by several organizations specialized in logistics and transportation, which includes the company  Transalinetas Logistic, that operates under the franchise SEUR Group. Since its establishment, the group has been identified by innovation and environmental respect, always at the forefront as a leader in quality and service excellence.

In order to demonstrate to their customers the level of environmental commitment, its governing body decided in August 2011 that Plan B Group had to be responsible for implementing an environmental management system based on EMAS III regulation at its headquarters in Tenerife and Gran Canaria. The EMAS III regulation is the reference of European Environmental Management, so obtaining this type of validation is a great effort by all involved parties.

The reference of European Environmental Management

During the process of implementing the environmental management system it had to retrieve extensive data to show track of all environmental aspects (fuel consumption, use of raw materials, waste, etc). A successful work of adapting all applicable legal requirements was also performed, especially when having to fully comply with environmental legal requirements, due to the harsh demands of EMAS III regulation, as for the validation of EMAS is not allowed any type of deviation in this regard (Industrial safety, permissions, licenses, etc.). Simultaneously, there were applied the introduction of the necessary documentation to comply with the requirements of customers to the service (road transportation of goods), training of the staff of the organization and the outsourcing bodies to implement the system correctly without having any changes in the methodology.

In May 2012 Plan B Group was once again responsible for carrying out the internal audit and validation of environmental claims, along with the executive board of the company, renewing the validation of EMAS III regulation.

Similarly, in 2010, Grupo Valora decided to apply for the EFQM model as a guiding principle to follow in business excellence, purpose for which also relied on Plan B Group as a consulting firm that launched the process implementation to undertake major changes in the procedures of their projects internally and externally.

After conducting a series of internal self-assessments by staff of the entire structure of the Corporation, it proceeded to select a range of strengths and areas of improvement in each of the 9-point criteria of the EFQM model. After work prioritization, three improvement plans were selected to overtake for the next 9 months, before the visit of verification bodies, Bureau Veritas and the Management of Excellence Body. After receiving the final score (+200) it was confirmed the certificate of excellence commitment.

The certificate of excellence commitment

During the years 2013 and 2014, the entire group has been working hard to take a new step forward in the commitment to excellence of Grupo Valora, considering as an objective the certification +300, which involves the development of a Conceptual Memory of the entire business model, demonstrating  approach, deployment, evaluation and revision of the 9-point criteria of the update version of the EFQM model of the year 2013. 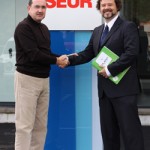